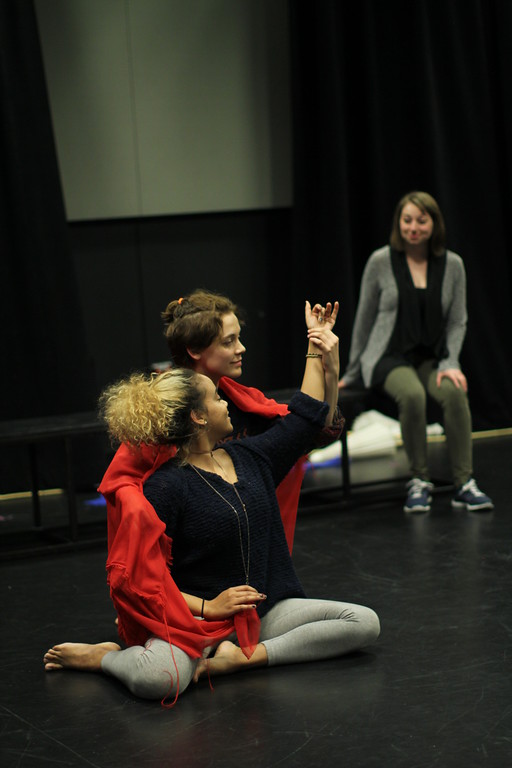 We had a wonderful rehearsal process. My approach to this piece was to keep it as performer-driven as possible. Anything technical - be it sound, lights, or scenery - would be kept to an absolute minimum.

We had several categories of props that actors used to convey a variety of things:

As for scenic elements, The White Snake featured an impressive display of string lights, hung like a pagoda roof over the playing space. The set consisted of five 8ft x 3ft platforms that sat upstage of the playing space and were masked by muslin fabrics. The muslin was painted and treated to simulate calligraphy panels of ancient China. I actually told Jason, my scenic consultant, to rip it off directly from the opening sequence of Mulan in which the great wall of China was painted upon a canvas. Our version, however, did not use any buildings or human-created landmarks. Instead it was a series of landscapes, with Mount Emei, the home of our spirits, at center.

I divided rehearsal into three distinct periods: the workshop, actual rehearsal, and tech. The workshop phase consisted of my ensemble and I looking at the major images of the piece and experimenting with different pictures and ideas.

Just a side note - I'm going to be using Lady Bai and white snake interchangeably here.

We began by going from scene to scene. I knew I wanted a series of recurring images to serve as "bookends" of the play.

I recalled a YouTube clip I watched for research, and I loved this above image the dancers created. The performers were hidden beneath a large hive structure that would blossom open occasionally. I knew this was the image I wanted to open with, mostly because it was metaphoric.

The hive was created twice in our play, at the top of the opening sequence and then again at the end when the white snake is imprisoned. The idea of creating these bookends was to convey to the audience that they were approaching something like a novel and opening the cover to reveal the story. In addition, the image also represented the Thunder Peak Pagoda. Thus, the audience arrives at the site of our heroine's destruction and it opens up to teach them her story.

When the hive blossoms, the parasols separate into two columns, containing the playing space. In retrospect, I probably should have left this formation throughout the duration of the play so as to line the stage and establish what Zimmerman calls "the open field of play." Oh well.

Each time the hive opened, the parasols would eventually find these parallel lines signifying the beginning and ending of our tale.

The columns were a nice touch because it created a path for two of my favorite images in the play: Guan-Yin - the thousand handed Bodhisattva, and Lady Bai returning the red umbrella to Xu Xian. 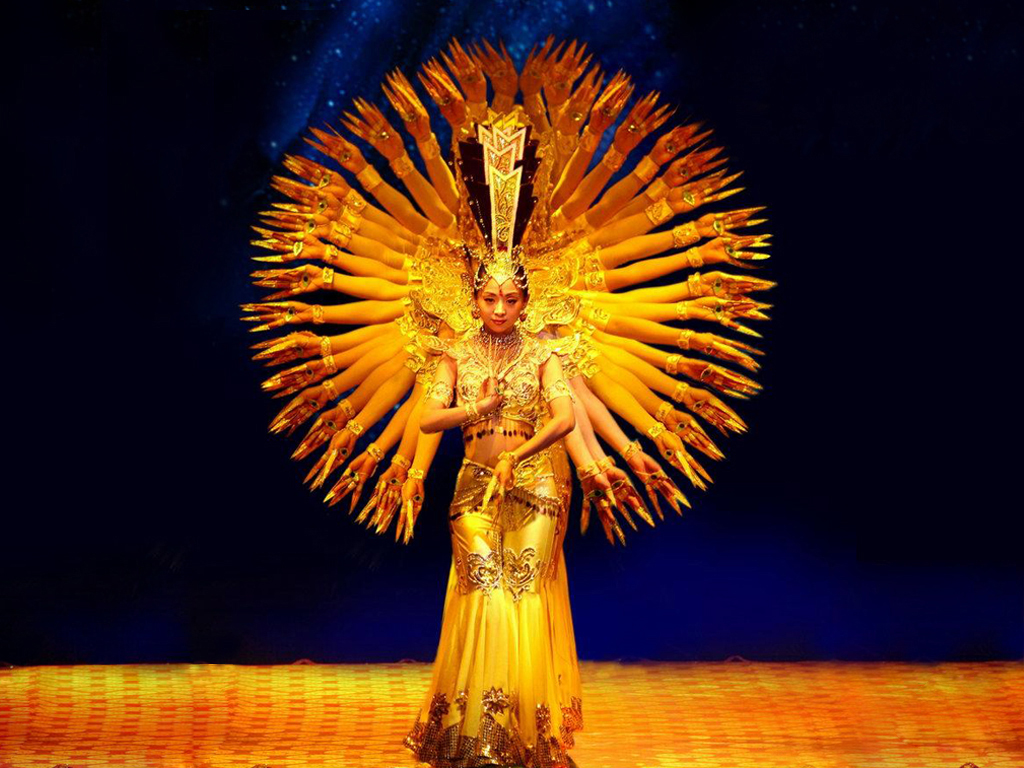 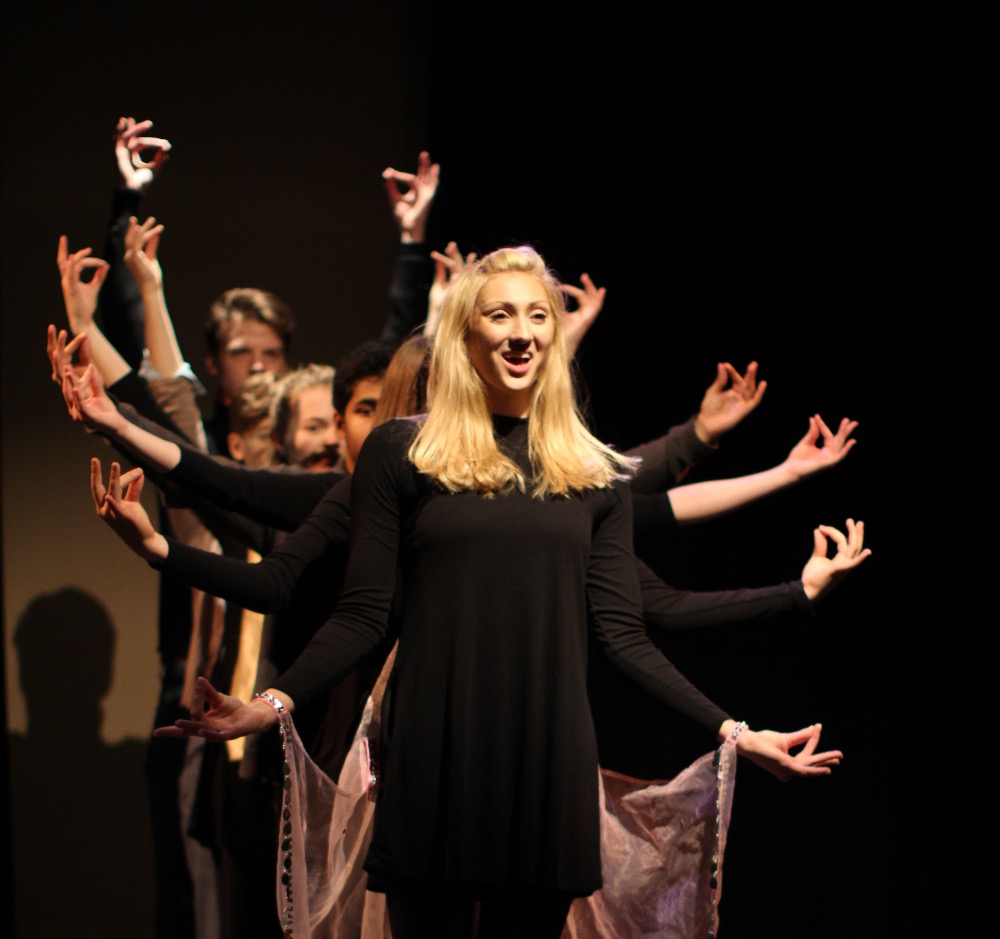 I should add, as disclaimer, that all of these moments did not come after just a day's rehearsal. Many of them kept changing (even during tech, much to the chagrin of the actors) before they reached their "final" versions in performance. To be frank, I was not entirely satisfied with some of them, and if we had had more time these instances would probably still continued to have evolved.

When we workshopped through the whole play, it was a matter of putting all the pieces together and improving on our flow. An exercise I would use to help build characters was by taking a scene (every scene had no more than three or four speaking parts interacting at a time) and having all the actors trade parts until they had all played each other at least once. It was extremely productive, because actors playing their own characters could nab and steal what they liked from other performances, and furthermore it also got them acquainted with the text more intimately.

There is no task as fun yet as daunting as rehearsal - it's my absolute favorite part of the process. I hate performances, opening nights, etc. They're too much anxiety on me, but our rehearsals were always brimming with creativity and (more importantly) productivity.

One daunting task I had was incorporating music into the piece. I had two composers - Jake Smith and Kirsten Mossberg (both of whom I literally cannot, pun intended, sing enough praises for) - that created a score alongside my harpist, Celia. Truthfully, music seemed intimidating, but my ensemble was game. My two major soloists, Mason and Juliana, are extraordinary singers, and the rest of the cast easily picked up a tune.

As for my harpist, I was straightforward with her from the beginning: "You are a performer," I said. "So think of yourself as an actor. Contribute your music when the conversation calls for it. Make sure you understand the tone and the beats of the scene so that whatever your play makes sense."

Celia had no problem at all, she was always ready to improvise when the moment called for it, and in addition she did a great job of recommending pieces for us when we needed them. For instance, it was Celia who recommended using "Watermelon Man" as the background to the pharmacy ballet, and Debussy's Petite Suite "En Bateau" for the first boat. In general, collaborating on music was something I was terrified of, but actually found myself enjoying immensely. I think it may have been because I was trained as a pianist and singer, so I knew how to communicate what I felt the production needed more articulately -- but that might be giving me too much credit. Celia, Jake, and Kirsten are just wildly intelligent individuals.

Two moments audiences will never get to see (thank the lord)

1) I put "All Night" by Chance the Rapper in right after Lady Bai drinks the realgar wine. I thought it would be a fun moment to juxtapose the story's mystical tone with some hip-hop energy and contort the white snake's view of reality. It was a cool experiment, it looked great in rehearsal, and the dance we created along with it meshed really nicely among the actors, but ultimately it was a huge interruption in the tone and pacing of the play. Funny story too - I told my actors "I'm gonna be cutting lots of stuff, but if anything is staying, it's this."

I'm thankful I went back on my word.

2) We created a cool labyrinth that was just far too long. It involved four actors using bamboo poles as walls to guide the acolyte who was leading Lady Bai and Greenie into Fa Hai's chamber. Great concept, poor execution.

I am immensely proud of our production of The White Snake. It was definitely the play I needed to reawaken that spark inside of me. There are, however, still moments and even structural elements that I wish I could address.

Closing the play was like standing at an art gallery and looking at a piece I insisted was unfinished, but my agent forced me to display anyway. I felt that while I was tremendously happy with its composition, there was so much more that could be done. But, perhaps, with another production.

This post is only a sketch of the effort and it took my ensemble to create the world of Hangzhou. While it gives a great summary, there are somethings that are simply beyond expression. At the end of the process I can only reflect how extraordinary this experience was. There is nothing quite like the pure joy of getting to make good theatre. I am happy to have finished it, but more blessed to have shared it with my friends and family.

Until the next one,

Interview with Dongni Miao RE: 410[GONE]

In Conversation: Diversity in the Theatre

My Life in Bangkok